Torments of the Traitor – Song of the Tears (Book 1) 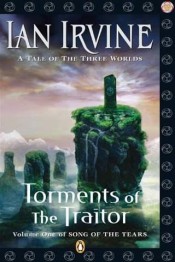 Volume One of Song of the Tears (a tale of the Three Worlds) this begins as Nish, after ten years of solitude, is about to be released from the blackest prison of his corrupt father, the maimed God-Emperor, Jal-Nish Hlar. Using the sorcerous Profane Tears, Gatherer and Reaper, Jal-Nish has crushed all opposition and is remaking Santhenar in his depraved image. Nish has a choice, to join his father as his lieutenant or face another ten years in prison as the people’s champion, the Deliverer.

The one person who can help him is little Maelys, a shy, bookish dreamer…but Maelys is the last woman he wants, and she carries a secret that is more likely to destroy Nish than save him.